Giving voice to
the unheard

In East London, young people are being asked what they think about where they live and what needs to change. Andrew Harland and Dinah Bornat share how it’s changing design thinking.

Aberfeldy Village stands out because too often children and young people are ignored in conversations around local planning. Despite them often knowing their own areas like the backs of their hands, as one Year 9 pupil pointed out.

At Aberfeldy Village, a joint venture between Poplar HARCA (Housing and Regeneration Community Association) and Ecoworld, community engagement over the new masterplan started with 100 pupils at local schools. A radical departure, given that teenagers rarely even feature in visualisations for new development.

The existing Aberfeldy estate is boxed in between two busy main roads, the A12 and A13, and the River Lea. Regeneration will provide 1,500 new homes. The pupils were asked to write a manifesto for the neighbourhood, to help them critique the masterplan as it developed. They wanted a friendly place, one that would be easy to get around and give them more freedom. They wanted it to be green, and to work for all ages.

Engagement is being led by ZCD Architects, working closely with the design team: LDA Design, Levitt Bernstein Architects and Morris and Company.

Local walking tours, for both the primary school children and the secondary school pupils, provided the design team with insight into their everyday lives.  The young people said that given the chance they often preferred to be outside with friends rather than on screens, but a strong narrative emerged around safety. The ‘tunnels’ beneath the dual carriageway are strongly disliked, and some pupils are driven the short distance to school because of them. While many would like to cycle to school, only one person did. Even spaces which were liked during the day become unwelcoming after dark, as early as 4pm in the winter.

This engagement has directly shaped design thinking. The walking tour showed that the young people stayed far closer to home than expected, which means that provision for them needs to be spread throughout the public realm, and they need inviting and safe circuits for walking and cycling to encourage them to explore and be more connected to their neighbourhoods.

Urban environments rarely make it comfortable for teenage girls to take exercise, and so at Aberfeldy Village, the cardio gym equipment they prefer is separate from the strength bars. Girls also generally want to be less visible when exercising, though not hidden.

Estate regeneration will see the concrete vehicle underpass under the A12 transformed by colour and light and become a car-free route for pedestrians and cyclists which connects to green spaces. It will be a destination and landmark with social hang-out terraces, play areas, and a climbing wall, and be enlivened by a café, a bike workshop and workspaces.

Formal play informs the masterplan, with good provision for teenagers, such as terraces for socialising which overlook spaces for activities like bouldering and parkour. Girls wanted integrated tables and seating in squares and parks, and there will be colourful sculptural seating planters in the high street. Urban environments rarely make it comfortable for teenage girls to take exercise, and so at Aberfeldy Village, the cardio gym equipment they prefer is separate from the strength bars. Girls also generally want to be less visible when exercising, though not hidden, so planting gives partial enclosure. Some cardio equipment has integrated seating for sociable use.

The young people quickly ‘read’ good design on walking tours, commenting that courtyards and pedestrianised streets felt “like a place where you would trust your neighbours”. Along a new car-free spine which runs north to south, front doors will be paired with low walls for seating to create communal spaces.

Aberfeldy Village stands out because too often children and young people are ignored in conversations around local planning. Despite them often knowing their own areas like the backs of their hands, as one Year 9 pupil pointed out. The deputy head teacher of the secondary school involved has reported that now other members of the local community are consulting the students on new plans. “Word has spread that student voices and views are powerful and forward thinking.”

Practical guidance is already available through an excellent toolkit, ‘Voice Opportunity Power’. All over the country, developers and community groups need to start giving young people a voice in debates about how their neighbourhoods might be changing.

All photos are by Thomas Graham. The students are from Langdon Park School in Tower Hamlets.

Dinah Bornat of ZCD Architects led the Aberfeldy youth engagement programme. She is an expert in child friendly cities and a Design Advocate for the Mayor of London.

Andrew Harland is a director at LDA Design, the landscape architects for Aberfeldy Village, and believes that placemaking starts with the people who will use the place.

The Leading Line: a new generation of design codes 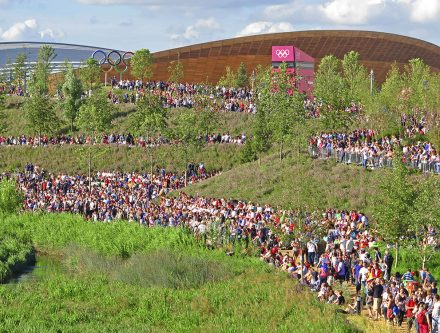 Ten years on – the making of the Olympic Park 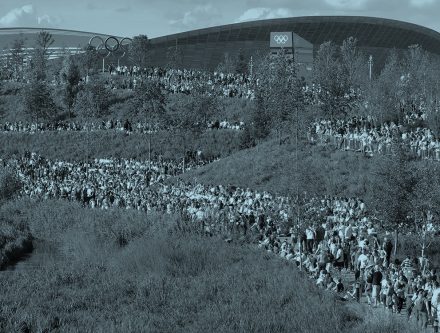