A project that matters ...

Swansea Bay Tidal Lagoon is a world-first energy solution. It is also visionary place-making and a real chance for wider regeneration. 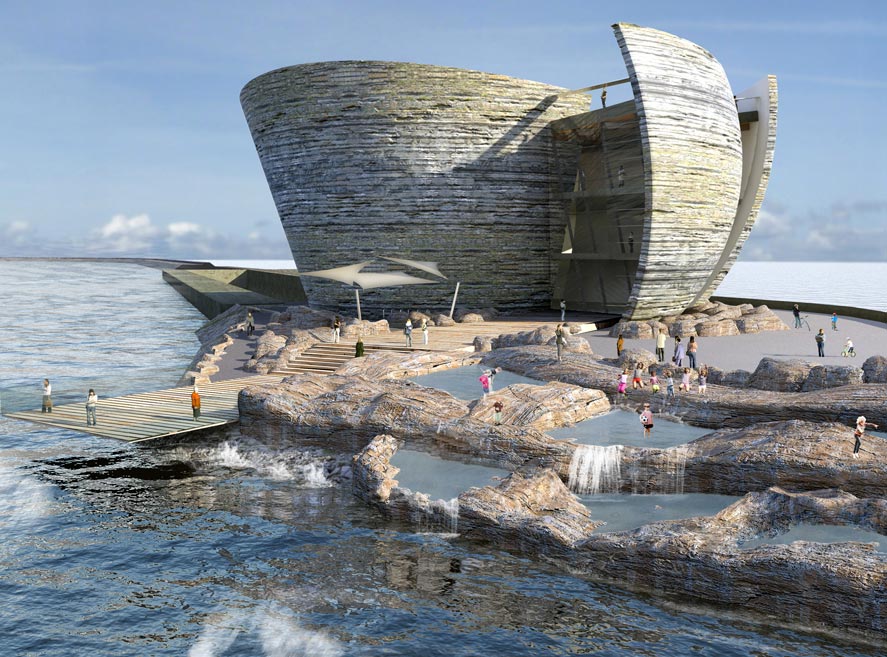 The proposed tidal lagoon in Swansea Bay takes advantage of the UK’s extraordinary tidal range, which is the world’s second highest.

“Swansea Bay Tidal Lagoon is a once in a generation opportunity to deliver a major strategic asset.”

By harnessing the power of the tides, Swansea Bay Tidal Lagoon could deliver a step-change in the UK’s energy mix, helping to address the looming shortfall caused by halted new nuclear proposals and power plant closures.

Better still, the scheme is also visionary placemaking. Swansea Council recently described the proposal as a “once in a generation opportunity to deliver a major strategic asset” for south west Wales.

A tidal lagoon is a man-made, U-shaped breakwater, built out from the coast. In Swansea, the lagoon wall will impound 11.5 km sq. of water with a tidal range of 8-10 metres. Energy is generated four times a day by channelling water through 16 20MW bidirectional turbines, three kilometres out at sea.

The Swansea lagoon, developed by Tidal Lagoon Power (TLP) with a masterplan by LDA Design, will meet 90 per cent of the region’s total household electricity demand, that’s over 530GWh/yr of electricity – enough for 155,000 Welsh homes.

With an estimated breakwater life of at least 120 years, the lagoon will last twice as long as a nuclear facility and five times longer than an offshore wind farm. The timing and volume of daily tidal movements is predictable, making it the most reliable form of renewable energy. Unlike nuclear, no complex and expensive decommissioning is required. The lagoon walls will continue to remain in place acting as an artificial reef system, supporting new marine habitats along the sea wall. 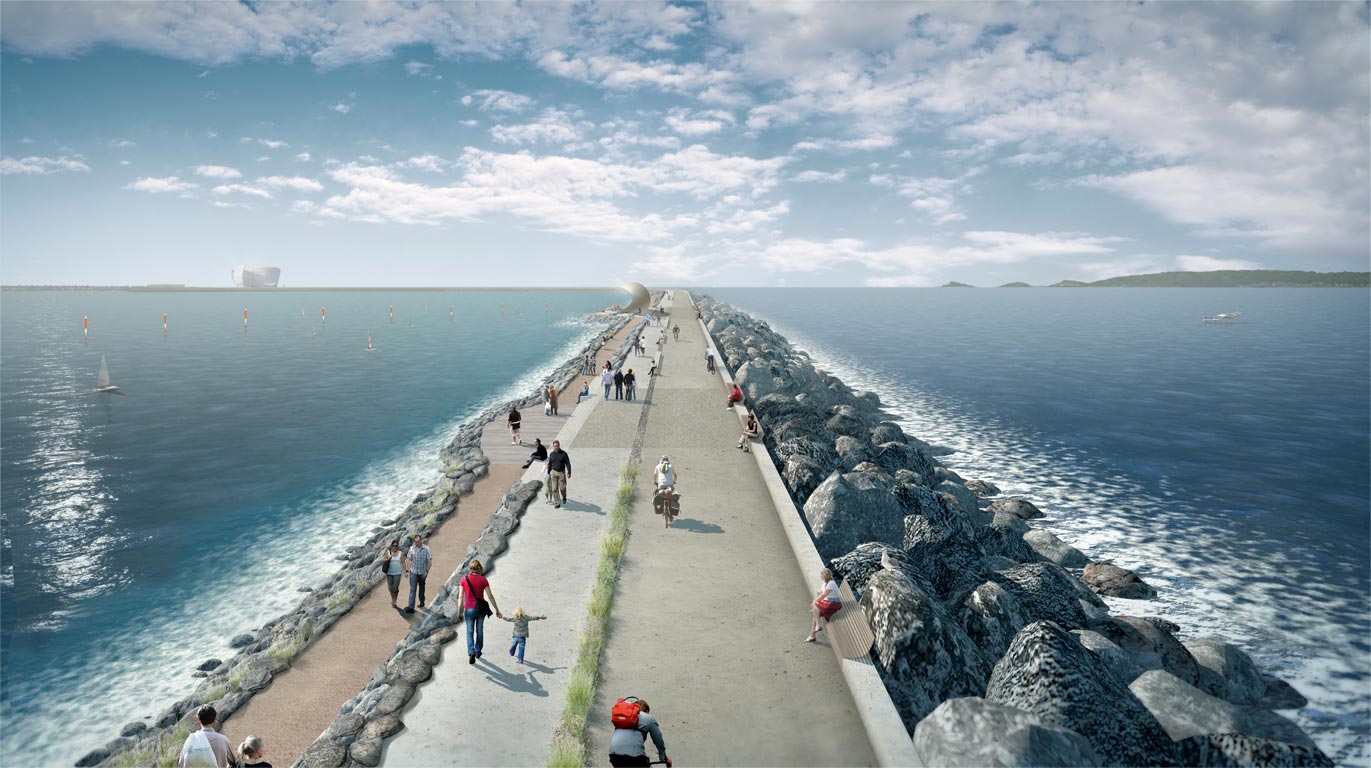 A new energy centre for Swansea and a major new tourist destination. This is masterplanning as a social endeavour. 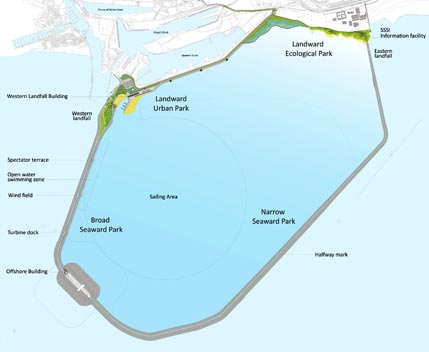 By harnessing the power of the tides, the lagoon will generate enough green energy to power more than 150,000 homes annually, helping to secure the UK’s energy supply.

Critically, Swansea Bay Tidal Lagoon is not just about sustainable energy production – it also offers much wider social and economic benefits for Swansea, South Wales and the UK as a whole. The lagoon utilises a broad range of creative resources to deliver new technology and regeneration at the same time. It is masterplanning as a social endeavour.

The lagoon masterplan will regenerate 2.5km of redundant dockside on Swansea Bay, opening up the seafront to the public for the first time in over a century. The sea walls can help reduce future flood risk and create the framework for a new maritime park.

The intent is to create a major tourist destination and watersports venue, including a regional sailing centre, visitor centre and research facility. New beach and saltwater marsh environments will enhance local ecology and to provide an attractive setting to Swansea University’s new Bay Campus.

This multi-functional approach to critical infrastructure is game changing. Rather than seeing the lagoon in isolation solely as a power plant, this pioneering scheme recognises the wider benefits of integrating key infrastructure within the community.

The focus in Swansea is on creating dynamic public realm that is connected to the city centre. The multi-functionality doesn’t take away from the primary objective of energy generation, but serves to enhance it.

There are clear economic advantages of this approach too. The entire lagoon programme will help the UK to meet critical climate change commitments, at a relatively low cost. Swansea Bay Tidal Lagoon will only add, on average, as little as 20-30 pence per household bill per year. It will boost the Welsh economy by an estimated £76 million a year, creating nearly 2,000 jobs during construction and 180 during operation.

The benefits have not gone unnoticed by local people, with the scheme receiving a resounding 86 per cent approval rating from the community – a huge vote of confidence in renewable energy and in a scheme that sees major infrastructure as an opportunity to connect people and place through landscape.

A regional sailing centre and a new beach are just part of the vision for Swansea. It is overwhelmingly supported by local people. Image © FaulknerBrowns Architects

The power of nature

Swansea Bay has been developed as a ‘pathfinder’ project for the industry and forms part of a potentially wider programme for TLP of six lagoons in UK waters, capable of generating sufficient energy to supply approximately 8% of the UK’s total electricity. The lagoons would support a new UK-wide industry for bidirectional turbine fabrication, with a new turbine and manufacturing facility will support construction.

Last year, the UK Government shelved plans for the lagoon in Swansea based on grounds of cost. However, The Guardian newspaper recently reported that a new backers, including developers Land Securities and Berkeley Group, are looking to sign a power purchase agreement. The addition of solar to the scheme could help to increase energy production and lower costs.

With a fair wind, this could mean that in just six years the people of Swansea could benefit from a regeneration scheme that would kick-start growth and become a magnet for investment.